Lessons to Last a Lifetime A foundation in reading is the classic predictor of academic success. But there are also certain character traits—like confidence, gratitude, integrity and patience—that are critical to success in the classroom and in life. Shalom Israel Diggs, a Jersey City teacher, dancer and artist, believes we should teach those foundational qualities right along with the ABCs.
“These are abstract concepts that children in pre-K and kindergarten may not necessarily be learning, but they’re definitely doing,” Diggs says. “They’re having confidence, they’re being grateful. But they may not have the vocabulary to apply to it.”
In 10 years of teaching dance, gymnastics and children’s workshops in New York City, Diggs had students of all ages, from preschool through high school, and she noticed a discouraging phenomenon: The older kids got, the less open they were to learning.
Somewhere between toddler and teenager, she says, natural enthusiasm and curiosity give way to a learned guardedness, even cynicism, that’s self-defeating. Diggs knew that if she could empower and instill emotional intelligence in students when they were still excited to learn, those lessons would pay off years later, inside and outside the classroom.
Thus the AlphaKey Alphabet was born. By replacing the classic, tangible phonetic examples of the ABCs (apple, ball, car) with intangible ones (achieve, bold, confidence), Diggs teaches on two tracks simultaneously, giving children the building blocks of literacy and life skills.

Diggs began developing her alphabet in 2015 and officially unveiled it a year later, with the AlphaKey Alphabet Activity Coloring Book. She designed a mascot, Alphee, a stuffed elephant who stars with his human friend, Leo, in a book about days of the week. (There are more books to come.) She also expanded the principles behind the AlphaKey Alphabet and created the AlphaKey Club, a holistic educational program that she began teaching in interactive workshops.

She took the AlphaKey program into schools and libraries, community organizations like the YMCA and Boys & Girls Clubs, and retailers such as Barnes & Noble. She took it to a school in Dominican Republic. She also adapted it for teens and adults, including 18-to-20-year-olds in Miami who were aging out of foster care, and corporate employees who were mentoring as part of their professional development.

“I can cater it to the group, but it’s still about the foundation of our language, how we communicate, and having the social and emotional skills to interact, to go after our goals, to be consistent, to not give up,” Diggs says.

Still, her primary focus was on young children. She went back to school to get her master’s in special education, and started working on a YouTube series focused on Alphee and AlphaKey. The ultimate goal was to go digital, so she could reach children throughout the United States and even in other countries.

A Tool for Families

With schools closing practically overnight last spring, and the pandemic threatening the new school year, Diggs responded by adapting the AlphaKey Club to a series of weekly virtual workshops for families. Now available on the Airbnb platform, each hour-long workshop focuses on a new letter and its corresponding concept, incorporating reading, discussion, movement, music and art.

The art component doesn’t just keep kids engaged, Diggs says; it also leaves them with tangible reinforcement of the concept they discussed. During the “A” workshop, for example, each child makes an “achievement quilt” composed of patches representing their past accomplishments and future goals. The quilt serves as a visual reminder of what they want in life and what they’re capable of, and it prompts them to continue the discussion at home, with their parents and friends.

In fact Diggs encourages parents to participate in the virtual program too, so they can model, reinforce and keep talking about the qualities taught in the workshops. But she acknowledges that isn’t always possible.

“That’s not to throw shade on anybody,” she says. “I’m not a parent. I just got a puppy, and that’s really hard on me right now. Being a teacher, I totally understand that you just have to do the best you can with the tools you have.”

If the pandemic has proven anything, it’s how much parents want to give their kids a good education, and to keep their kids safe in a difficult world. AlphaKey Club is a tool to help them do both. 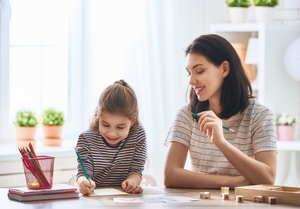