A Feast for All Seasons: Embracing the Rainbow Year Round by April Thompson
No matter where we live, eating seasonally in winter doesn’t have to be boring or limiting; a culinary adventure awaits the home chef that’s willing to leave avocados and asparagus to their rightful seasons and embrace the winter rainbow of bitter greens, sweet potatoes, sunny citrus and fuchsia beets, among other timely delicacies.
“Sometimes people think of winter foods as brown and soft and boring, and it’s absolutely not the case. Winter brings bright things like pomegranates, beets and citrus, which offer color and acidity,” says Brigit Binns, the Paso Robles, California author of 30 cookbooks, including Cooking in Season: 100 Recipes for Eating Fresh.
Eating seasonally is especially important in winter, says Shannon Stonger of Texas, author of Simple Food for Winter: 30 Grain-Free Recipes to Get You Through the Dark Days. “Winter foods like fermented vegetables, root vegetables, squashes and hardy greens are especially helpful in the colder, darker months, when our bodies are in need of comfort foods as well as pre- and probiotic foods,” says Stonger, a homesteader and founder of the blog Nourishing Days.
There are plenty of other reasons to stick to a seasonal diet in winter, adds Binns. “Food always tastes better in the season it was intended to be eaten in. Seasonal foods are naturally ripened, rather than harvested early and trucked in. In addition to enhanced flavor, eating seasonally helps minimize use of fossil fuels to bring our food to us, and is likely to be less expensive.”

Much of the fall harvest, particularly root vegetables, stores well through the winter (hence the idea of a root cellar), extending produce across seasons, according to Steven Satterfield, chef and author of Root to Leaf: A Southern Chef Cooks Through the Seasons. There are lots of root vegetables beyond just carrots and potatoes to be enjoyed in winter, including sunchokes, parsnips and turnips, which can be used creatively rather than “boiled to death,” says Satterfield. For example, the Atlanta restaurateur incorporates parsnips into an upside-down cake with winter spices like nutmeg, black pepper and ginger.
Binns likes to add texture to winter dishes with nuts, color with herbs, and crunch with a winter vegetable like fennel. Warming soups are always comforting during the coldest season, but she also likes warm salads, like a beet and escarole salad drizzled with a warm sherry vinaigrette.
Satterfield suggests that specialty citrus like blood oranges, Meyer lemons and cross-hybridized varieties such as tangelos and pomelos are fun to intersperse with winter vegetables to maximize brightness and freshness. A lot of winter produce can be great in raw form as well, he adds, including Brussels sprouts, rutabaga or daikon radish, shaved thinly or julienned into a salad.
Winter squash is a favorite staple of the Stonger family in the cooler months. “It is easy to grow, easy to store and so deliciously sweet and rich. We roast it as a side dish, mash it as a sort of breakfast porridge or make soups and curries from it,” says Stonger.
Satterfield suggests using all the parts of winter vegetables to maximize the harvest and minimize food waste. For example, the seeds of winter squashes can be roasted with herbs and spices and eaten as is, churned into other dishes such as a squash seed granola or blended and strained into a homemade broth to add some texture, fat and flavor. After roasting carrots with Moroccan spices, Satterfield suggests taking the leafy carrot tops and chopping them with cilantro and garlic to make a green sauce to crown the carrots. Swiss chard stems can also be chopped and cooked into Portuguese bread soup, with leftover stale bread made into olive oil croutons and egg whites stirred in at the end.

Beyond selecting seasonal produce, chefs recommend a few key dietary tweaks in winter, such as stepping up vitamin D consumption. “Since you’re not seeing a lot of sun this time of year, it’s more important to get it through colorful vegetables like carrots, cabbage or radicchio. Watermelon radishes are another winter vegetable full of vitamins,” says Binns.
“You can grow your own sprouts throughout the winter as a great microgreen option. Sprouts are incredibly high in enzymes, something often lacking in other winter dishes,” suggests Stonger. “Fermented vegetables and other fermented foods can make up the difference in winter.”
April Thompson is a freelance writer in Washington, D.C. 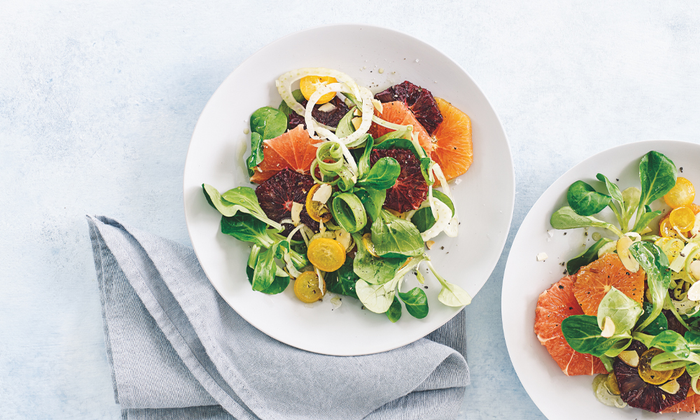 photo by Ray Kachatorian
Winter is the height of citrus season, with an appealing display of oranges, mandarins, tangerines, tangelos, pomelos and more in the best-stocked markets. Use a varied mixture of sweet-tart types for the prettiest, tastiest salad.

Cut the celery in half lengthwise. Using a serrated vegetable peeler or a mandoline, shave the celery into thin strips lengthwise down the ribs. Cut the strips in half crosswise and place in a bowl of water. Set aside.

Separate the mâche leaves and transfer to a shallow serving bowl. Working on a plate to capture all the juices, use a serrated knife to cut a thick slice off the top and bottom of each citrus fruit. Working with one fruit at a time, stand it upright and, following the contour of the fruit, carefully slice downward to remove the peel, pith and membrane. Set the fruit on its side and cut crosswise into slices about ⅜-inch thick, discarding any seeds. Transfer the slices to the bowl with the mâche, reserving the juices for the vinaigrette.

Cut the fennel lengthwise in half. Using a mandoline or a sharp knife, cut the fennel crosswise into very thin slices and tuck among the citrus slices. Drain the celery and distribute evenly over the salad. Using the serrated knife, cut each kumquat crosswise into very thin slices, discarding any seeds. Scatter the kumquat slices evenly over the salad, then sprinkle the almonds over the top.

To make the vinaigrette, pour the reserved citrus juices into a measuring cup. Add enough additional orange juice to measure ½ cup then add the vinegar. Whisking constantly, slowly add the olive oil and whisk until well combined. Season to taste with salt and pepper. Drizzle the vinaigrette over the salad, toss gently to coat, and serve.

From Cooking in Season: 100 Recipes for Eating Fresh, by Brigit Binns 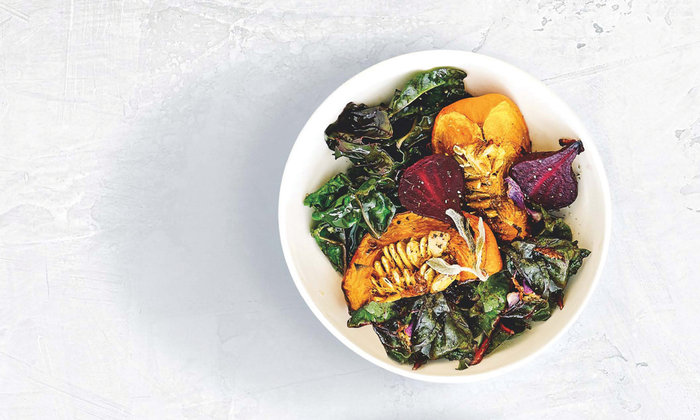 Cut the winter squash into wedges and remove the seeds, if desired. Transfer the wedges to a baking dish. Halve the beets and add to the dish. Drizzle with the oil and toss to coat. Bake in a preheated 450° F oven, stirring once, until tender and lightly browned, 20 to 40 minutes. Let cool. Peel and slice the beets. Place the chard in a bowl, drizzle with some of the vinaigrette. Toss to coat. Add the squash and beets, drizzle with the remaining vinaigrette, and season to taste with salt and pepper.
From Cooking in Season: 100 Recipes for Eating Fresh, by Brigit Binns
In-Print, Conscious Eating National Content Recipes vegan plant based Feature February 2020

11:00am · Church Square park
View All Add Your Event